The 20-year rendezvous of Jupiter and Saturn is called the great conjunction and known as the monarch maker.
It’s part of a 200-year cycle (the great mutation), which is part of a long 800-year cycle.
☆ Learn more about;
☆
This change of the guard, and what to expect.
☆
What happened in past cycles.
☆
Is this the dawning of the Age of Aquarius?- the definitive answer.
☆
What the plague, SARS, antebellum fashion, rise and fall of Rome/Feudalism/Ghengis Khan, and the millennium all have in common and why.
☆
Do you have Saturn in Aqua? This is your Saturn return! I have a job description for you that’s under repped in the job market.
☆
Jupiter in Aqua or strong Aqua placements, this is your lucky year, Go. For. It!!
☆
*Note Chinas reopening of the Silk Road, the one belt, one road initiative cost is 900 Billion, not trillion! – yet.
🌞  Enjoy!
☆
+ check out my new book COSMIC POWER to get better acquainted with your sign, and commit to glowing your own way.
▲STAR POWER a simple guide to astrology for the modern mystic
▲COSMIC POWER ignite your light, a simple guide to sun signs
▲Find your Unique Star Power with 1:1 exclusive live reading with me
▲Sign up to my mailing list to keep up with the cosmos
Stay Cosmic!
Vanessa Montgomery | Astro All-Starz Resident astrologer for Glamour magazine, Vanessa Montgomery is a professional counseling astrologer based in Australia. Montgomery is the author of Star Power: A Simple Guide to Astrology for the Modern Mystic as well as Cosmic Power: Ignite Your Your Light, a Simple Guide to Sun Signs for the Modern Mystic.   Aimed at enlightenment and seeing past labels to the oneness that unites us all, Montgomery’s work also helps navigate the practical essentials with grounded cosmic intel.
Her motto: Free your mind, own your power, create your world.

It is my absolute pleasure to share Jessica’s insights as she is another of my all-time favorite astrologers and modern mystics respected internationally as a counseling and lecturing Astrologer as well as a Psychic Medium – with an ever-growing fanbase across the globe. On my list of which astrologers to listen to and learn from, Jessica, like any self-respecting Goatly Capricorn is at the pinnacle thanks to her 25 years of practical application and socially progressive style.

Lanyadoo has lectured extensively on Astrology and is well respected within the Astrological community for her unique and pragmatic approach.

In this episode, we’ll share excerpts from Jessica’s book, Astrology For Real Relationships, which reflects her progressive style with constructive Capricorn real talk from consent to boundaries to Venus in the first house topping from the bottom–yes you read that right! I find the best way to get to know the signs (planets, houses, aspects) is to talk to people and listen in for those keywords and classic tells because we relentlessly express the archetypal signatures in our birth chart.

Join us for a snappy-Cappy-guide- to-life, as we cavort through:

★ The 1 question everyone asks in consultation even if they don’t realize it.

★ How to say ‘I don’t know’ instead of fudging it

★ Strategy and the long game

★ that sense of humor we don’t often hear about, but should!

And so much more – pro tips ahead! Take notes! and commit to at least one thing to take on board from #Capricorn life. Starling, if you resonate, don’t hesitate;

▲ Find Jessica Lanyadoo for Capricorn real talk, wisdom astrology and woo, all rolled up in an excellent sense of humor At; Love Lanyadoo.com

▲ Pick up your copy of Jessica’s book,  Astrology for Real relationships; you, me and how we all get along

▲ Tune into Ghost of a podcast twice weekly

▲ Keep up with  Zodiac the vote- astro and politics, activism, super easy ways to mobilize and get involved.

Look for more dropping in the new year.

Finally, have a great season of the sea-goat, and take at least one hot tip for practical application in your life.

🌞  Enjoy! + check out my new book COSMIC POWER to get better acquainted with your sign, and commit to shine. 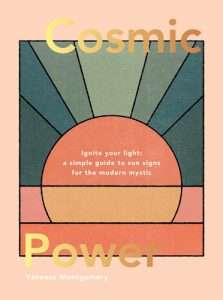 How are ya’ll finding this tense planetary ‘3’s a crowd’ at the moment?
Saturn conj Mars in Sag for a power headache, aggressive boundary control or just really tight thighs and hips?

All pushed to a head by the unattainable ‘shoulds’ and expectations indicated by the square to rarified Neptune in Pisces that has us wanting the ultimate everything.

I for one have all of the above plus sudden bad skin…Mars is heat and anger, Saturn is boundaries, hence, the skin as the boundary between our perceived self and the rest of creation.

Saturn is the ultimate in manifest creation and the boundary we are able to perceive that enables us to function rationally in this world, total left brain function…Neptune is like the ultimate in non manifest and the ability we have to also operate beyond this rational, logically perceived world..total right brain unity consciousness (see this blog for more deets on unity consciousness http://www.anhglobal.org/en/node/591) Get these two in harmony and you have a beautiful balance of left and right brain platforms that you can toggle between, thereby achieving a more whole experience possible for a human being.

Transcendent bliss vs worldly comforts/success. These two in square mean the two polar opposites are blindsiding each other in our consciousness, yet pushing for integration.

The areas in your chart these two are found indicate which areas of life you’re experiencing the conflict. The problems will most likely reveal as expectations and shoulds.

It’s worth the battle to get these two parts of self and areas of life into some kind of mutually beneficial operating platform.

The book ‘Men are from Mars, Women are from Venus’ could be applied to these two parts of self or operating systems preference of left over right or right over left brain outlook.

The area of life Saturn and Mars are currently affecting for you is where you’ll be patrolling the perimeter like a muscled up Doberman with a bloodlust for freedom. Any perceived threat to said freedom will set you off and have you cuffing intruders, interrogating and your best impression of police brutality. Best you put out a warning sign, enter at your own risk. Fire signs will be particularly prone to combustion. If you get your head bitten off, back away slowly, let them cool off and don’t lock horns unless chargrilled looks good on you.

The area of your life (house of your natal chart) transited by Neptune will be where you expect nothing less than unity consciousness, unicorns, goddesses/gods and the ultimate nature of reality to just explode all around you. Or at least whatever your idea of perfection is in that house, without any actual effort from you. You’ll also be very sensitive, empathetic, and loving, finding the bliss in everything and one, a channel for artistic or spiritual endeavour.. or the shadow side, questionable boundaries, drained or draining it, or victimy/martyring of yourself or just failing at mundane reality ie, income and daily life, escapism through addiction (drugs, alcohol, t.v, virtual reality/internet, food).

And these two sides of your life are currently competing for you to favor one, when in fact you’re evolution calls you to balance them to win the lotto on life.

Watch for justifications you might be using to OK your own behavior while blaming others that do similar..look deeper under behavior and actions for the values you’re trying to achieve, and why whoever is upsetting you isn’t meeting those values. This enables you to become more aware of what you really want, so you can find healthier ways to communicate and achieve what’s important to you.  This approach allows you to let go of needing to control others into meeting your values and appreciate theirs.

Let me know how you go and what works best for you!

HOW: I look through the biggest pity party stories I’m currently running on loop and work through the list from the Sobbiest or angriest one down, breaking them apart, pulling out the ‘shoulds’ and opening up the polarities to see the real picture in its entirety. From where I realise my original position was just a speck on the radar of reality and feel gratitude for regaining my position in true reality. (Yes there are super simple techniques for doing this).

‘The truth will set you free’ as they say.

Ain’t that the truth!

Client quote of the day

‘You know what’s wrong with society today..No one drinks from the skull of their enemies anymore’.

In light of the recent full moon in Capricorn, I expect such a display would send a definite message of personal and professional BOUNDARIES.

Are your boundaries impermeable, do you Sally forth with the confidence that comes with aforementioned impermeable boundaries?
Capricorn rules both boundaries and the skeletal structure.

How could you interpret this motif in a modern-day setting that in no uncertain terms lets others know where the line is so they don’t even ‘try it’? You know you’ve been successful when there’s that resounding awkward sound of tumbleweeds and furtive eye glances! No one said Saturn (rules Capricorn) was a master of social graces for a reason! Experiment with it. When you stand up for yourself directly without insult to anyone, yet no accommodating unwanted behavior everyone wins in the end.

Boundaries are attractive and make others feel safe knowing clearly where you edge is.

Saturn (in Sag) is Square to Neptune (in Pisces)
=

You are compelled against all odds to either manifest (Saturn)your dreams (Neptune) or erode structures currently restraining you from your dreams…build an expansive platform to show case your greatest, most sacrosanct vision.
Now more the ever is the time to integrate both the push and breath/doing and being.
As they teach the kids in China…’Don’t be shy, have a try’

Do NOT follow this link or you will be banned from the site!
Astro Allstarz - For Modern Mystics